Affordable, reliable 3D printers are the coolest development of the last decade or so. The first ones I used, years ago, were so fussy and unreliable that every attempt to print your new towel hook would almost certainly generate miles of plastic spaghetti instead. That was only funny once, and after dozens of failures, you don’t even want to try anymore. But a friend recommended Prusa printers to me, and 3D printing has been delightful ever since (they don’t sponsor me, this is just a sincere, unsolicited recommendation). They can cost as little as a few hundred dollars, and I’m amazed every time I print at how reliable they are. At some point it occurred to me that I could customized to my liking some of the expensive pieces I use in the lab, then print them instead of ordering, so I’m sharing the files here.

Originally I was going to design parts with a CAD program, but Nick convinced me to try blender instead. I noticed first that it was a huge and powerful program which would allow you to design a part for printing, or produce a 3D feature length film, if you had time. I noticed second that you could script anything you wanted with python, so that settled it. 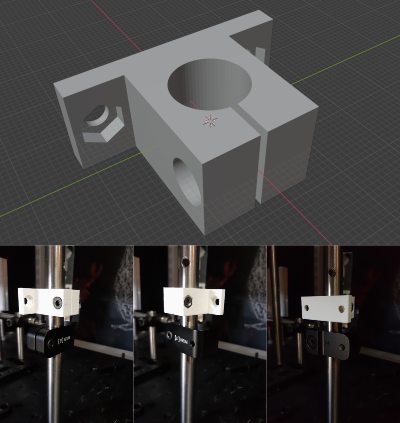 In our lab we use opto-mechanical parts to position and hold equipment, like steel posts that attach to aluminum breadboards. The image shows a post clamp during design in blender, and printed on a post. It uses a captive M4 nut and bolt to tighten against a 12.7mm (half inch) post (you can tap threads into plastic, but this is stronger). For comparison a newport post-clamp is pictured below it, which also tightens with an M4 bolt. But the newport part costs $24, and the plastic and bolt cost pennies. Alternatively, I have a CNC mill and I could machine the part myself, but I estimate it would take me 4 hours (meaning it would actually take 20), and my clamp prints in just 1 hour 8 minutes. I love nice, precision-machined, metal parts (they are worth the money), but the plastic printed versions are shockingly strong and accurate. It’s so convenient to modify and print as many as I want, whenever I need them. Here is the stl file for the clamp, which you can slice and print yourself:

And here is python blender code so you can edit to your liking: